Kelly joins Porter Wright as an associate in Cleveland

Porter Wright is proud to welcome McDaniel (Mac) Kelly as an associate in the firm's Cleveland office. Mac will serve as a part of the firm's litigation team and will focus his practice on complex commercial litigation.

Prior to joining Porter Wright, Mac served as a senior law clerk for the Honorable Thomas M. Parker in the U.S. District Court for the Northern District of Ohio. During his time there, he worked closely with the judge to mediate disputes and help resolve cases before trial. Mac also brings experience as a staff attorney in the U.S. Court of Appeals for the Eleventh Circuit where he drafted opinions on a range of matters, including consumer protection, securities, health care fraud, employment discrimination, civil rights and immigration. 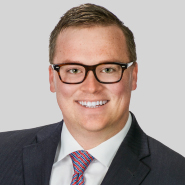