Porter Wright is proud to announce that attorney Teresa Snider was named to the 2020 list of Notable Women in Law by Crain’s Chicago Business. Snider is the co-chair of the firm’s Reinsurance Litigation and Arbitration Practice Group.

Snider truly is a pioneer for women in the insurance and reinsurance industry. She began her legal career more than 25 years ago when the industry was male-dominated. Despite being one of the few female practitioners at the time, she quickly positioned herself as a “go-to attorney” for understanding and investigating reinsurance issues.

Snider has played a significant leadership role for women in the insurance and reinsurance industry. Early in her career, she identified a need to bring together female insurance and reinsurance industry leaders to learn from each other’s experiences. This is what inspired her and two other partners to create Women in Reinsurance (WIR) in 2004 to bring women together to discuss how the reinsurance industry was evolving and how women could play a dynamic role in the future of the field. The event draws women from all professional levels – from claims handlers to CEOs – and from all segments of the industry areas – including company representatives, arbitrators, independent consultants, government employees, and inside and outside counsel. 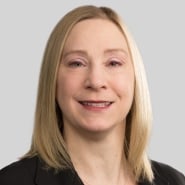