In addition to representing parties in federal and state courts, Kathleen also has experience arbitrating disputes. She was selected by the Private Adjudication Center at Duke University to serve as an arbitrator in the Dalkon Shield products liability class action settlement and in the Smith Barney employment discrimination class action settlement.

Kathleen is a fellow of the American College of Trial Lawyers and served on the ACTL Board of Regents from 2013-2017. She is listed in Best Lawyers® and has been recognized as a “Leader in their Field” for Commercial Litigation in Ohio by Chambers USA every year since 2006. Kathleen was named Best Lawyers® 2021 Columbus, Ohio Litigation – Regulatory Enforcement (SEC, Telecom, Energy) “Lawyer of the Year.” 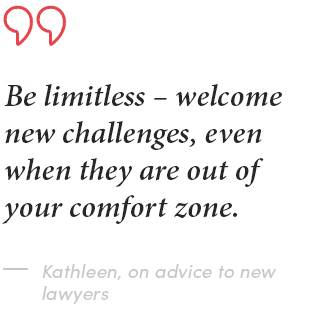