Judd practices primarily as an arbitrator in major international commercial and investment arbitration cases. For further information on his experience as an arbitrator, please refer to Representative Matters. Judd has also practiced in the areas of international business transactions, international project financing and government contracting. He has been a partner at Porter Wright Morris & Arthur since 1982.

Judd’s practice has included counseling of major international companies, to their immediate legal needs and more broadly as an advisor on major foreign policy issues affecting business. Based on his experience and long relationships in the executive and legislative branches of the United States government, he has an established track record of enabling clients to identify and deal with sensitive political and business issues based on information going well beyond what is made public in ordinary media sources. He is knowledgeable in all aspects of U.S. export controls, including ITAR, EAR and OFAC, and has successfully managed complex voluntary disclosures and investigations related to the above.

Prior to joining Porter Wright, Judd was assistant general counsel of the Agency for International Development (AID). He was appointed by President Reagan to the career rank of counselor in the Senior Foreign Service. He was also chief counsel for AID's Near East and North African programs and before that, chief counsel for its Latin American and Caribbean programs. Earlier, he was chief legislative counsel for the agency, special assistant to the Under Secretary of State for Military and Security Assistance and resident regional legal adviser for AID in South America for five years. During this period, Judd had principal responsibility for legal aspects of cases involving more than $800 million in assets of U.S.-owned private investments nationalized in Chile by the Allende government, including a major role in representing the interests of Overseas Private Investment Corp. which had issued political risk insurance for many of those investments. 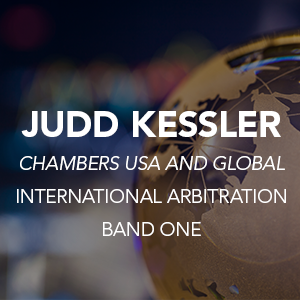