Kathy joined the Cincinnati office of Porter Wright after 24 years as an Assistant United States Attorney for the Southern District of Ohio. Her prosecution specialties were complex white-collar and other major economic crimes, public corruption, and environmental crimes.

Describe a pivotal moment that influenced your career path.

While I was in law school in the early 1970’s I decided that I wanted to be a trial attorney. I had been an actress in productions from elementary school through college. I loved to argue. I loved to put on a show. Perfect qualities for a courtroom lawyer. In my third year of law school, I had a job interview with a senior partner at an insurance defense firm. I told him I wanted to be a trial lawyer and learn insurance defense from the ground up, that I would go to the field and investigate, that I was not afraid to do anything to learn the work. He was aghast. He said that clients, judges and juries would not accept a woman trial lawyer. He suggested that the firm might hire me to keep the records of the firm’s corporate clients. I was aghast. I silently directed an obscenity from me to him, and promised myself, “I’ll show him!” And I did. After five years of corporate practice in a utility, I got a job in government, often the only employer that would hire women to do courtroom work in those days. I did become a trial lawyer, well-respected in Cincinnati for the trial work I did as a federal prosecutor.

What advice do you wish you could give your younger self, just starting out in the legal field?

I wish that I had been able to channel my early lack of confidence in a constructive way to be more effective as a lawyer. In the very adversary situations in which I practiced as a prosecutor, I wish I would have schooled myself to react better to some defense lawyers who did not respect women as lawyers. I would have been conscious to never let them see me sweat. Hey, I was an actress, I should have been able to pull that off! Doing so would have made me a more effective lawyer. I should have used that lack of respect to build my confidence, much as I had used that senior partner saying women were not suited to be trial lawyers. Women lawyers still face challengers. Bias may be more subtle, but it is still present and unacknowledged by those who harbor it. Using challenges to increase resolve still works for me.

Name an attorney you admire and tell us why.

Ruth Bader Ginsburg, because she has fought her whole life for equal rights for women and supported women in the profession.

If you could have dinner with anyone, dead or alive, who would he/she be and why?

Jane Austen because, I love a good book, she writes like I would like to write fiction, and we could talk literature and life.

Complete the sentence: “If I wasn’t an attorney, I would be…” 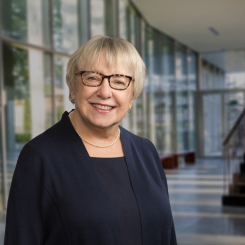