Holton named to University of Dayton board of trustees

Thomas Holton, Counsel to the Firm in Porter Wright's Corporate Department in the firm's Dayton office, has been named to the 2013-2014 University of Dayton board of trustees for a three-year term.

The current board consists of 35 members, of which four serve as ex officio. The members represent the Society of Mary, alumni, the greater Dayton community and the national community. 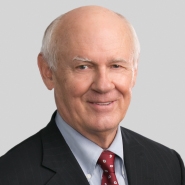