When Bing Crosby and Peggy Lee sang about wanting to get you on A Slow Boat to China in 1948, the founding of the People’s Republic of China was a year away. Bing wasn’t crooning about commodity flows and likely didn’t envision a drift to a socialist market economy.

But these days, insiders at Ohio’s Development Services Agency are singing about the economic opportunities in the world’s largest nation and they’re trying to convince Central Ohio business executives to sing along.

There are 1.4 billion people residing in China, and 300 million of them are classified as middle class. That means China’s middle-class consumers nearly equal the entire population of the U.S. And while American middle-class spending is almost stagnant, China’s economy is growing at a rate of about 10 percent a year.

“Ohio businesses would be crazy to ignore the opportunities available in China,” says attorney Curt Loveland, who practices corporate and securities law. “The middle class in China is hungry for American products, particularly those with brand names.”

In the interest of disclosure, Loveland is a partner at the Columbus law firm that employs me. I don’t work in his practice group, but I have watched from the sidelines as Loveland and associate Haifeng Hong work with Ohio businesses looking to establish a presence in China. Hong thinks American companies that use strategic planning, tap into state economic incentives and establish supportive Asian contacts can flourish in ever-evolving Chinese markets.

“It can be daunting” Loveland conceded, “and most companies don’t know where to start.”

Compliance issues are particularly troublesome, “but with the right guidance, U.S. companies can have great success in China,” he said.

One of the greatest U.S.-to-China success stories is led by the Colonel. In the quarter century since Yum Brands Inc. debuted its first Kentucky Fried Chicken restaurant in Beijing’s Tiananmen Square, it has opened 4,260 KFCs in 850 Chinese cities. Its operating profit in China last year reached $1 billion. How remarkable is that? Loveland points out that in its 60-year history, the Louisville, Ky.-based fast-food chain opened 4,600 restaurants in America. He also pointed out that, although Japanese consumers often resist American food, Chinese consumers crave products labeled Made in America.

KFC is selling a lot of chicken in China. General Motors Co. is selling a record number of cars there. Loveland thinks small and midsize American companies can be just as successful in China.

“If you have a good American product,” he said, “they are going to buy it.”

Colleen Marshall is an attorney and news co-anchor for WCMH, the NBC4 news partner of Columbus Business First. 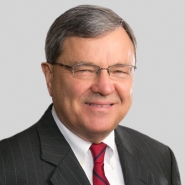